Her decades of research and many experiments show two important things. First of all, people can be influenced to take on a fixed or growth mindset before they take on a task. Secondly, individuals or groups with a growth mindset almost always outperform the ones with a fixed mindset.

After reading Dweck’s book some years ago, I started giving more praise for effort to my children. And as mental toughness coach, I tell them that it is OK to fail and feel a bit scared when taking on daunting tasks. Recent research now shows that children who are praised for being smart, or who are told they have a reputation for being smart, are more likely to be dishonest and cheat. The fixed mindset therefor doesn’t only have an impact on performance and taking on challenge, it also has a moral impact. Enough reason to make sure as a parent you praise effort

I was the proudest father this week. After a school concert, my 6-year-old daughter was asked by her teacher in a video “what is one thing that you learned”. She answered, “when you go in front of an audience, it is OK to be scared and have fears”. She also said that she “was proud to have overcome her fears”. Being aware of your fears and facing them, overcome them, is a very important life skill. Challenge, or stretching oneself, is also one of the four attributes of Mental Toughness.

Proof reading my new children book My Strong Mind for about twenty times might have played a role. In my new illustrated book for 5-7 year old, that will be released next month, the main character Kate tells herself when she has to do a show and tell in front of the class; “it’s OK to be scared”. And when she’s doing a cartwheel in front of here friend, Kate says to herself; “it’s OK to try and fail”. 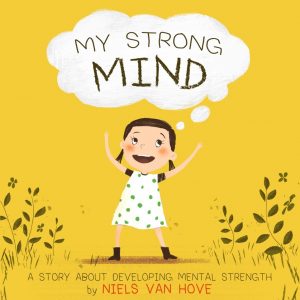 It is OK to try and fail and it is OK to be scared, for a child or an adult. We have to acknowledge those feelings and deal with them, or even turn them in to our favor. Enough adults struggle with this challenge element of Mental Toughness. However, you can start now with developing the growth mindset and the challenge attribute in your children.

Just start by praising your children’s effort, tell them it’s OK to try and fail, and don’t just tell them they’re smart.

Niels is founding coach at MentalToughness.online. He wrote a children’s book My Strong. For adults he wrote the self help guide Building Mental Toughness: practical help to be yourself at your best.

My Strong Mind III has arrived

How to help your child beat their bully